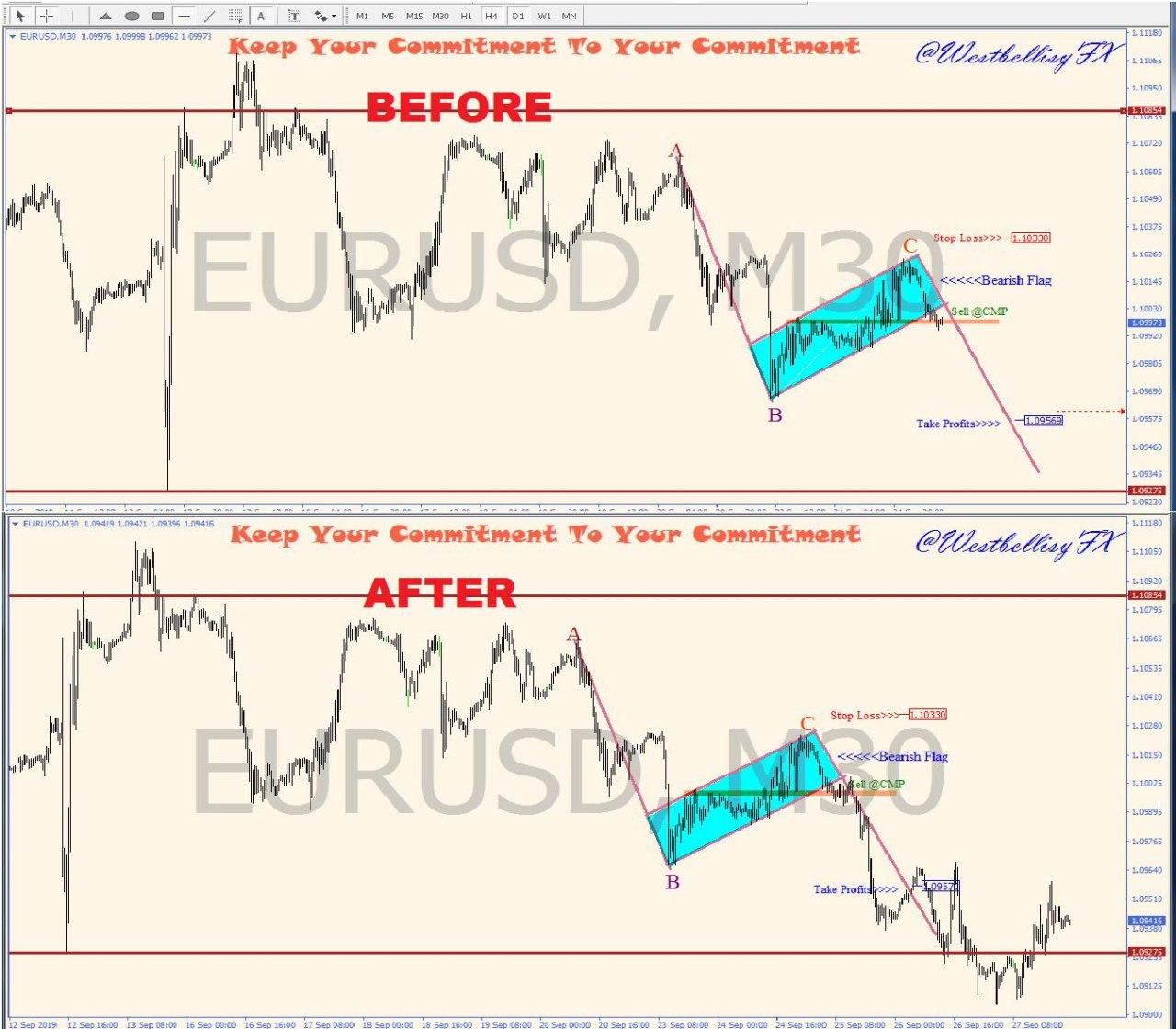 Chart patterns are used to spot profitable opportunities before they occur. There are 7 basic chart patterns that every beginner should know.

In a symmetrical triangle chart pattern, you will see the lower highs and the higher lows coming closer to the center of the chart.

Both the sellers and the buyers cannot push the price their direction. As a trader, you should know that breakout is bound to occur.

And it can occur at any of the two sides of the price, so you can trade this pattern by placing two orders. One order just above the slope of the lower highs and another order just below the higher lows slope.

The idea is to cancel the wrong order as soon as the break out occurs.

Before you go too far, Join the Westbellisy signal channel here.

This is when you have a straight out resistance level and a slope of higher lows. In this chart, buyers are starting to gain strength because they are making higher lows.

The buyers keep putting pressure on the resistance level and that will eventually lead to a breakout.

In most cases, the price will go up but you shouldn’t take that as a sign to go long instead, you should be ready for a movement in either direction.

Set an entry order below the slope and above the resistance level.

This is the opposite of ascending triangles. The straight line here is the support level and the slope is the higher lows.

The sellers are starting to gain some grounds against the buyers which turn into lower highs. Usually, the price will breakout at the support level and continue to fall, however, you shouldn’t care where the price will go next.

Since you know that a breakout will occur and the price will surely go somewhere just place your entry orders at the two possible places the breakout can occur.

The double top is a reversal pattern that is formed after there is an extended uptrend. These two tops are peaks formed when the price hits a certain level that can’t be broken. The second top isn’t able to break the high level of the first one.

Double tops are a strong sign that a reversal is about to occur because the buying pressure is about to finish.

With double tops, you should go into the trade by placing your entry order below the neckline in anticipation for the reversal of the uptrend.

Double bottoms are also a reversal pattern that is the opposite of double tops. This time you will be looking to go long instead of short in double tops. The pattern occurs after an extended downtrend when two valleys or bottoms are formed.

The price form two valleys because it can’t go any further and the second valley too can’t go lower than the first.

This is a sign that the selling pressure is about to finish and that a reversal is about to occur. Similarly to double top, in this situation you would place an entry order above the neckline.

This is also a trend reversal pattern. It is formed by a peak (first shoulder), followed by a higher peak (head), and then another lower peak (second shoulder).

A neckline is down connecting the lowest points of the two troughs. This chart occurs after an extended uptrend.

The slope of the neckline can either be up or down. Experience has it that when the slope is down it produces a more reliable signal.

The head is the highest peak between the two other peaks that are lower to it in height.

We look to make an entry order at the neckline. We can also calculate a target by measuring the high point of the head to the neckline. This distance is approximately how far the price will move after it breaks the neckline.

It is basically a head and shoulder formation in reverse. A valley is formed (shoulder), followed by a lower valley (head) and then another higher valley (shoulder).

This formation occurs after an extended downtrend movement. With this formation, you will place a buy entry order above the neckline.

Our target is calculated as the distance between the head and the neckline. That is the same distance for our profit margin except you lock your profits.

How To Pick The Right Time Frame To Trade